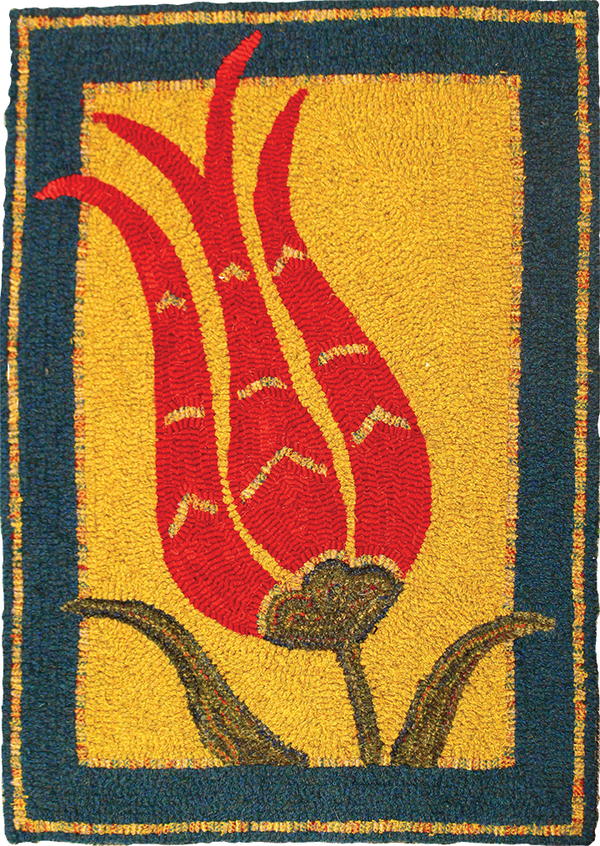 While I’ll never know exactly how an image of the Ottoman Tulip randomly appeared on my computer screen one recent fall day, I do know that I was immediately captured by its simple yet evocative ancient image. For most, the very word tulip brings an association with Holland and the history of “Tulipmania,” the wild speculation on prized Dutch tulip bulbs that took place in the 17th century.

The truth about tulips is so much more complex. The tulip is a wildflower native to Central Asia and Turkey. Originally appearing as a simple red flower with spiky petals, the tulip was cultivated by the Turks as early as 1000 A.D. The name tulip is derived from the Turkish word tulbend, or turban, whose shape the flower resembles. The tulip became immortalized in Ottoman culture as a motif used widely in art during the rule of Suleiman the Magnificent, 1494-1556. Used to decorate buildings, textiles, carpets, utensils, and manuscripts, the tulip was also used to decorate tiles used in imperial mosques. These were rendered in bright glazes including turquoise, a light, tropical blue color that took its name from its use on Turkish tiles. Under the reign of Sultan Ahmed III, 1718-1730, the period known as the “Tulip Era” became a time of peace and enjoyment where the arts and folklore again reflected the importance of this special flower.

The tulip made its way to Europe when Turkey opened its culture to western influences in the 16th century. In Dutch soil, the bulbs became infected with a virus that changed the appearance and colors of the tulip to the vision we have of them today; these familiar ruffled and variegated varieties are stable hybrids originating from the wild Ottoman, Turkish, or Istanbul tulip.

My rug design was born of images dating from the Ottoman Empire. I wanted to keep the tulip on center stage in its original form as a stylized wildflower. I hand dyed a red-orange wool for the flower and used simple textures to complete the background, border, and other details. In this way, the wool choices make the flower a gem-like centerpiece, while the simple and less expensive as-is wool textures keep this design more affordable.

The tulip is hooked in a red-orange hand-dyed wool cut into #7 strips.  After cutting, locate several strips that are from the lightest area of the mottled wool and set these aside for the tips that flow into the darker border. Next, outline the inside of each petal with the dyed red wool. Keep the flower tips sharp and spiky by hooking only one strip of wool into the very tip of each spike. Next, hook the chevron, and curved details inside each petal, and the base of the petals at the stem with the multi-color gold texture in a #8 cut. Continue hooking the tulip by outlining the chevrons, then hook the center of the tulips. Remember to use the lightest color of the dyed red in the petal tips.

Hook the leaves with a multi-color green striped as-is wool cut into #8 strips. For proper contrast, use the lightest edge of the wool strips for the leaf tips that flow into the dark border, and use the darker edged strips against the lighter inside gold background.

The background is gold herringbone as-is wool cut into #8 strips. There is a beauty line at the inner edge of the pattern background that stops at each leaf and petal as these flow into the border. The beauty line consists of the same multi-color gold texture used for the detail inside the petals. Be careful in outlining the tulip petals as you work: the final shape of the petals is determined by the outlining as much as by how carefully you hook the curved edges of the petals.

Hook the border with the dark turquoise herringbone as-is wool cut into #8 strips. Remember to hook a second beauty line one row inside the outer edge of the border.

Shelley Lencioni began hooking 22 years ago after discovering the art of rug hooking at the California State Fair. Shelley is a member of the Camellia City Rug Hooking Guild of Sacramento and is a certified McGown teacher, offering classes locally in Northern California. Shelley also owns and operates the iloverughooking.com website.

This article is from the September/October 2016 issue. To get this exclusive pattern or for more information on our issue, check out our issues page. 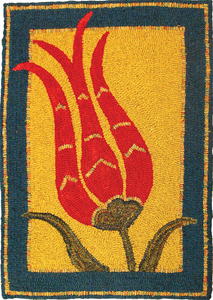 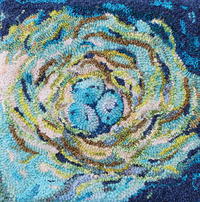