Home > Articles > To Punch or to Hook?

To Punch or to Hook?

Two Sides of the Same Coin 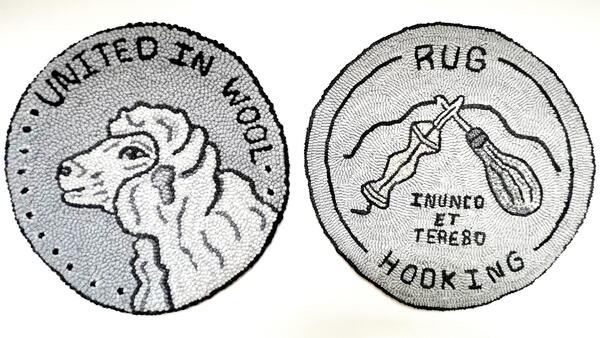 To Punch or to Hook

I was indirectly and directly exposed to both forms of rug hooking from an early age. I spent my teenage summers as a mother’s helper for a family in Nantucket. The mother of the family, Louie, had a great influence on me. I was at the age when any family but your own feels magical and perfect, and she was perfect in my eyes. She treated me like a peer, yet encouraged me like a mother in my artistic pursuits. At the time I loved needlepoint. She bought me blank canvases and set me on the path of designing my own patterns. Their Nantucket home was beautiful and filled with gorgeous New England-style hooked rugs, rugs that were punched with yarn (although I didn’t know they were punched at the time). I studied them as I worked on my needlepoint, unsure of how they were made.

One summer Louie set aside her own needlepoint for a new creative project, a rug hooking kit. It looked like the rugs underfoot, and I was fascinated. Would she be able to make something similar? The kit instructed her to tuck the foundation cloth under her leg to create the tension. It came with colorful yarn and a hook. Louie struggled greatly with the kit. With what I know today, I can see why she found it frustrating, not having a hoop or frame, and attempting to learn it on her own.
I have a vivid memory of the day she gave up on it. I was in the kitchen making lunch for the children. She sat with her back to me, looking out towards the water, when she sighed and said it just wasn’t for her, as she untucked it from her leg and placed it in a cupboard. I suppose I had a secret hope that I could try the kit, but it wasn’t meant to be at that time. However, the seed had been planted: the visual appreciation of yarn hooked rugs, the knowledge of a tool called a hook, and a craft called rug hooking.

A decade later my father bought a home in Cape Cod and started filling his new home with rugs that reminded me of those Nantucket summers. I had passed the intervening years with many different fiber arts, but I still had the nagging desire to learn rug hooking and his rugs only reawakened that desire. Even more years passed before I noticed my local yarn shop was hosting a rug hooking class. I signed up immediately. I assumed it would be a class with a hook, since at that time, I was unaware of any other technique. The class was using an Oxford Punch Needle. The history of rug hooking was discussed in the class, and I learned for the first time that there were two sides to hooking.

Rug hooking with a hook came first. It is generally accepted that it has its origins in the mid-1800s. The debut of the foundation cloth commonly used by rug hookers dates to this time and many a hook has been dated to that same era. With traditional rug hooking, the hook is inserted into the foundation cloth and the strip of fabric or yarn is pulled up from below, through the foundation cloth, creating a loop on the top side. This process is repeated, creating a running loop stitch. Wool strips are the most recognized material used in traditional hooking; however we know that yarn and other materials were also used depending on the geographical area and materials at hand.

Punch needle is often viewed as the newcomer in the rug hooking world, when in fact the first punches have patents dating to the early 1880s. As a new rug hooker holding a punch in my hand, I was fascinated to learn this. To use a punch needle, the needle is punched down through the foundation fabric and pulled back to the top side, skimming the surface of the cloth, and then punched down again, creating a running loop stitch. Yarn is more often associated with punch needle rug hooking than strips of wool, but either can be used. I will admit the running loop stitch fascinated me. It still does with its simplicity and the fact that tension holds it together. I simply could not get enough of it, and this led me in short order to the hook. I wanted to know how to create this stitch with both tools, and it wasn’t long before I was both punching and hooking. Although both tools create the same stitch, I do not use them interchangeably. I find, and I am sure it is personal preference, that I prefer one tool over another for certain projects. However, there are times when I like to combine them in the same project. Let’s take a look at my coin pillow to explore this idea.

Rebecca Martin lives in northern Colorado with her husband, two children, and her dogs. She is a certified Oxford Punch Needle Rug Hooking Instructor and in the process of obtaining her McGown Certification in traditional rug hooking. When she isn’t monitoring bubbling dye pots for her company StoryTeller Wool, she has a punch in one hand and a hook in the other—fighting to find time with her latest rug.

To Punch or to Hook? 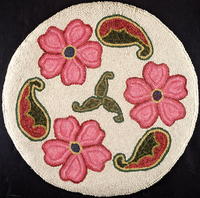 How to Pick a Hook 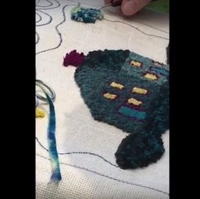