A Rug Hooking Exclusive Pattern: Hook an iconic symbol of our great nation.

Uncle Sam has been a symbol of our country since the War of 1812. One theory on the creation of this instantly recognizable patriot comes from Samuel Wilson, who supplied meat to the U.S. Army in barrels stamped with the initials "U.S." Someone joked that the shipments came from "Uncle Sam," and this comment led to the U.S. government being nicknamed Uncle Sam.

Samuel Wilson did not look like the traditional tall, thin, white-bearded Uncle Sam. The Uncle Sam we know today was drawn by Thomas Nast, who produced the first cartoons featuring Uncle Sam. The most famous portrait is the "I Want You" army recruiting poster from WWI.

In that spirit, "I Want You" to have fun hooking this iconic symbol of our great nation.

Uncle Sam is printed at 66% of the final size. To hook it at the size shown, enlarge it 150%. This size is ideal for #8-cut wool, but you can enlarge it to any size.

Measure the backing to find the center then measure out from the center and mark a rectangle 12 ½" wide and 36" tall. Draw the outside edges of the design with a permanent marker, staying between the same threads of the backing as you draw each side. This technique is called drawing on the straight of the grain.

Tape the pattern to a window or light box, lay the backing over the pattern, and trace the lines with a marker. Use your sharpest marker to draw straight lines, and a duller one to draw curves. Serge, zigzag, or tape the edges of the backing to keep them from raveling.

The key to hooking Uncle Sam's face is subtlety. Cut the strips for the eye, ear, and mouth in half lengthwise—or even smaller. Hook the brim of the hat before the face. Then hook the eye with a tail and two loops. Next hook the eyebrow, ear, hair, and beard, and then the face, neck, and hands. After choosing the location of the mouth, cut a loop of the face and insert the mouth into the cut area.

The expression on a face changes greatly with the movement of the loops. Try pushing the facial features around to see how the expression changes. When you have things where you like them, block them into place.

For Uncle Sam's jacket, use light blue to outline the lapel and sleeve. It is not necessary to outline the sleeve where it hits the background color. Fill the rest of the jacket with blue wool. On the sleeve and tail, where the inside of the coat is visible, hook antique black.

Hook a row of background before hooking the pants and the hat so you know where to end each stripe. Hint: Stripes stay straighter and cleaner if you leave tails at the end of each row instead of turning the strip to go back in the opposite direction. Start the pants by hooking the center red stripe—two rows straight up and down—to set up the pattern of the stripes. Continue hooking stripes out from the center, alternating two rows of red with two rows of gray/cream plaid. When hooking the gray/cream plaid next to the background, use the light part of the plaid to increase the contrast. For the hat, start with the two outside red stripes and work toward the center.

Flags are great elements in primitive rugs, but it can be a challenge to hook stars on the blue field. On a very small flag, I use blue-and-white specked wool to give the illusion of white stars on a blue field. Using an antique paisley for the red stripes on a flag creates a very aged look. Be sure to choose whites that are not too white: the grey/cream plaid used here contributes to rug's old look and creates interesting variations in value and texture.

Hook the stars by beading the wool to give the impression of white stars without actually hooking tiny little stars. Hook the flagpole first to keep it straight so it will act as a guideline. Hook two rows of antique black and then the ball at the top. Hook one row of blue inside the line all around the blue field.

Next, pick up a strip of blue and a strip of gray/cream plaid in your left hand. Make sure the gray is to the left of the blue. Starting at the upper right corner of the field, pull both tails up. Next pull up a loop of gray (next to the gray tail), then a loop of blue, and continue alternating until you reach the end of the row. Pull up both tails, making sure that the gray tail ends up next to the gray loop and the blue tail next to the blue outline. Then hook a row of blue. Continue alternating the beaded rows with solid blue rows until you have three beaded rows and four solid rows. For the stripes, hook two rows of red then two rows of cream/gray plaid. Alternate both colors until you end with a red row.

When hooking lettering, leave the tails long until you hook the background so you can pull the lettering loops a little higher to raise them to the height of the background. This trick cleans up your letters without having to rip them out and re-hook them.

Hooking the Background and Border

Start with a black outline around each semicircle in the corners. It is important to hide tails so they do not flap on the edge of the rug. Next, hook the blue corner quarter circles, keeping tails off of the edge of the rug. Then hook the red sections on the outside edges and alternate red with gray/cream plaid, working toward the center of the arc. Hook four rows of dark taupe on the border, connecting the semicircle shapes in the corners.

Hook at least one row of background around the motifs to define their shapes. Hook the remaining background in curved shapes to add movement and interest. After this part of the hooking is done, insert a narrow strip of the border color between the  background and face, and the background and hand, to add contrast. Adding this strip at the end keeps the line small and subtle.

Finish the edge by whipping it with wool yarn and catching a small amount of the binding tape with each stitch. In this way, the binding is securely attached, allowing you to skip a step in finishing. Create a narrow whipped edge that does not detract from the design of the rug.

Trim the backing to 1" and serge or zigzag the raw edge.  Sew 1 or 2 rows of straight stitching in the 1" area to prevent fraying. Block your rug (front and back) and let it dry completely. Lay the rug out on a table wrong side up. Fold the excess backing toward the back. Using T-pins, secure washed binding tape to cover the edge of the excess backing; leave a small amount of backing showing on the folded edge. Turn the rug right side up, and whip the edge with good quality wool yarn, catching a small amount of binding tape with each stitch. After the whipping is finished, tack down the other edge of the binding tape using button and craft thread. Do one final blocking of the front and back to get the binding to lie nice and flat.

I hope Uncle Sam inspires you to become more patriotic this Presidents' Day and that you enjoy hooking him as much as I did.

Sally Kallin teaches at her farm in Pine Island, Minnesota, and at workshops and camps across the country. Her patterns can be ordered through her Web site at www.pineislandprimitives.com, by catalog, or purchased in her wool-filled shop. You can reach her by e-mail at rugs@pitel.net.This pattern is for personal use only, and reselling of the pattern is prohibited.

This article is from the January/February 2010 issue. To get this exclusive pattern or for more information on our issue, check out our issues page.

Note: Wools are as-is textures. Amounts are based on cutting #8 strips. Some details on the face and hand are outlined with a narrow hand-cut strip. 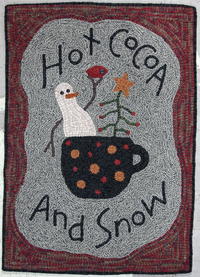 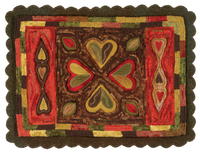 Hearts for a February Home 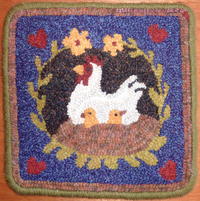