A rare glimpse at a duPont treasure

By: Linda Harbrecht/Photographs Courtesy of Hagley Museum and Library 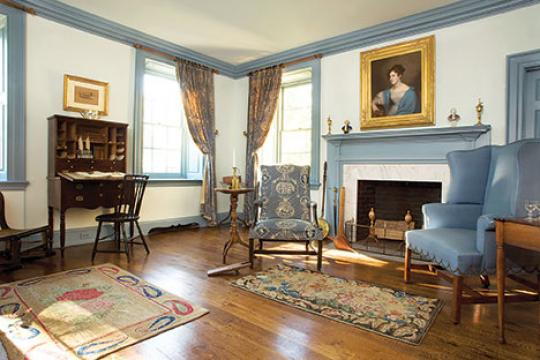 The Blue Room of the Hagley Museum and Library with a few of the hooked rugs in their collection.

The duPonts have an impressive family history that traces its roots to Parisian nobility. Their name was well known for the development of the largest black powder manufacturing firm in the world and, later, as one of the world’s largest producers of chemicals. The duPont descendants devoted themselves to centuries of philanthropy, had a strong impact on American politics, and can take credit for the establishment of the National Trust for Historic Preservation and several museums.

But for Nancy duPont Reynolds Cooch, these accomplishments represent more than a sense of ancestral pride—they were the inspiration for a years-long rug hooking project that honored both the duPont dynasty’s rich history and their more colorful and personal family stories.

The 10' x 12' rug, recently on display at the Hagley Museum and Library in Wilmington, Delaware, embodies the energy and artistic talent of Nancy D. R. Cooch, who designed and hooked the rug. Cooch, who died in early January 2015, also tried her hand at other mediums, always looking for a way to express her creative spirit.

She researched and designed more than 400 needlepoint kneelers that were used in the Christ Episcopal Church in Greenville, Delaware, and later wrote a book that also explored religious symbolism involved in her designs. She was active in many art, heritage, and gardening groups. But she is perhaps best known in the art world for her bronze sculptures and for pioneering carving in Lucite, a product developed in 1931 in the DuPont labs and later employed in aircraft windows for World War II aircraft.

This article is from the November/December 2015 issue. For more information on our issue, check out our issue page. 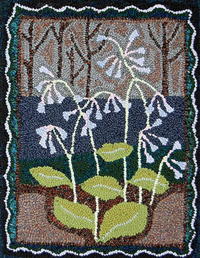 Hooked in the Blue Ridge