"Rudolph the Red-Nosed Reindeer" was written by Johnny Marks in 1949. Many musical artists were hesitant to record this song, afraid to contend with the legend of Santa Claus. But in 1949, at the urging of his wife, Gene Autry sang what turned out to be a hit. The song sold two million copies that year, going on to become one of the best-selling songs of all time, second only to Bing Crosby's "White Christmas."

As the song goes, poor Rudolph was never allowed to join in any reindeer games. Well, times sure have changed. This Rudolph is reading the latest rules for reindeer hockey and is prepared for the game, wearing knee pads and hockey skates.

Rudy Junior is printed at 100% of the final size. Use #6-cut wool on Rudy and #8-cut wool for the background. Trace the pattern on red dot and transfer it to linen. Be sure to draw on the straight of the grain.

Outline the antlers and fill in as needed using the golden brown wool. When hooking his face, hook the eyes first. Hook the entire eye with the tan wool. Use a thin strip of the green wool to hook a small dot in the middle of his eye. Pull up both ends of the green, tie them in a knot and cut off the extra wool. Next, hook the nose from the outside in, pulling the first row slightly higher than you are going to hook his face. With each new row, hook it slightly higher to get a rounded look. Outline his face, and continue hooking until the face is complete.

After you have completed everything but the finishing, use the red and green yarn and hook between the two rows of the scarf above the book. For the scarf below the book, outline the edges with the yarn and add the fringe. Add a row with both yarns to the edge of his red mittens.

Hook the crossed hockey sticks and puck with black. Then outline the book with the golden brown used on his antlers.

Hook the redbird with red, black, and gold wool. A white dot is used for the eye. Do this step last, using the same technique for the white dot as you did on Rudy's eyes, but don't tie the wool; just cut it off level.

Use the same technique used on Rudy's nose. From the outside in, pull the first row of black wool slightly higher than the surrounding wool. Hook each row slightly higher to get a rounded look.

Hook the skates with the same black as the kneepads. Use the same green as the scarf for the laces and blades. Hook the green laces first, and then hook the tongue in red.

Finish the edge by whipping with the green and red wool yarn. Sew around the edges with a zigzag stitch, roll the linen toward the top, and whip it with wool yarn. Steam the rug front and back, and allow it to dry. Rudy is ready to sit proudly on a flat surface or hang on your wall at Christmastime.

Annie Kennedy and Jane Hutcheson can be contacted through A J Creatives, 4024 Grimes Ave. S, Minneapolis, MN 55416 or visit their website at www.a-j-creatives.com. Rudolph is the fifteenth chair rug in their series, Would You, Could You, In a Chair. The rugs are all designed by Annie Kennedy. If you have an idea for a chair rug, Annie will be glad to design it for you.

This article is from the November/December 2011 issue. To get this exclusive pattern or for more information on our issue, check out our issues page. 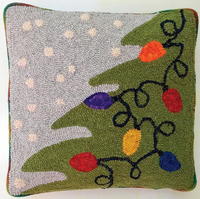 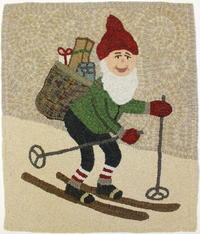 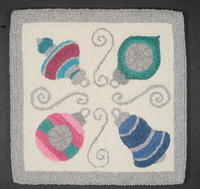