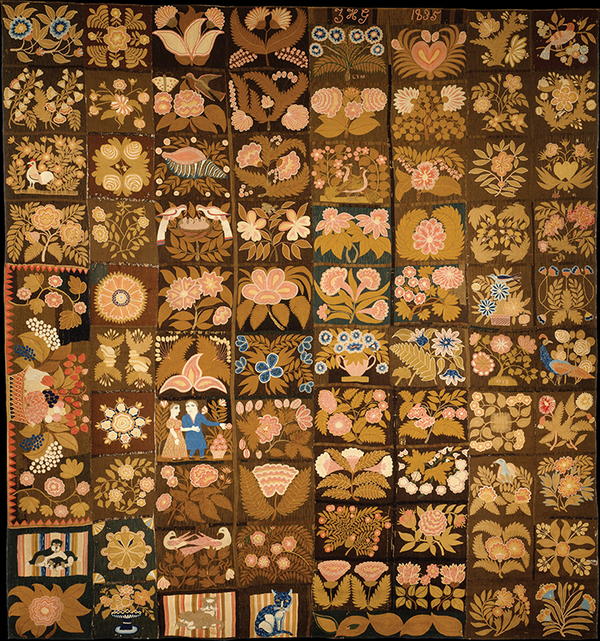 In 1832, a twenty-seven-year-old woman in Vermont took it upon herself to embroider one of the most intricately beautiful handmade rugs in American history. Sources say that Zeruah Higley Guernsey Caswell sheared the sheep, spun the wool, dyed her yarn, designed the rug, and embroidered the entire thing on a Tambour frame with a wooden needle. At more than 12' x 13', the finished item took her three years to complete.

The rug is made up of 77 blocks, inspired by nature—flowers and shells, birds and animals, and one block depicting a courting couple.

Named for its maker, the Caswell Carpet is now the property of the Metropolitan Museum of Art, though it sometimes travels to folk art museums for exhibitions. In 1974, the rug was featured prominently in American Hooked and Sewn Rugs: Folk Art Underfoot by Joel and Kate Kopp, who called it “the most famous and well-documented masterpiece of American rugmaking.” In 1979, Virginia Churchill Bath wrote extensively about the Caswell Carpet in her volume Needlework in America. In 2007, Roberta Smith reviewed the folk-art exhibition entitled “The Great Cover-Up: American Rugs on Beds, Tables, and Floors.” Smith’s article in The New York Times, entitled “When Home Was Where the Art Was,” singled out the Caswell Carpet, deeming it “magnificent.”

Well-known rug-hooker and teacher Laura Pierce of Petaluma, California, joined the ranks of Caswell Carpet admirers sometime around the turn of the twenty-first century. But Laura wanted to do more than write about this embroidered masterpiece. She wanted to re-make it as a hooked rug, and she did just that, with a little help from her friends. 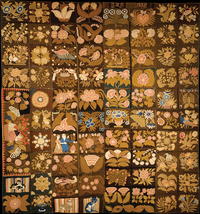 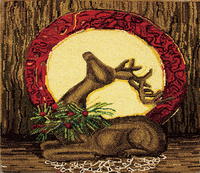 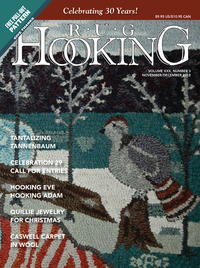